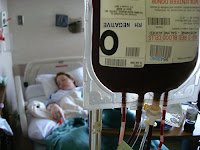 If you passed high school biology you probably know more about this than I do, but as I understand it there are eight basic blood types: A, B, AB and O, with something called an RH factor either present (positive) or absent (negative). My blood is O-negative.

O-negative is not the rarest blood type there is. In fact there are 3 or 4 types more uncommon, depending on your ethnicity. What makes O-negative so valuable is that it's the universal donor type. That means it can be given to anybody, no matter what their blood type may be! In emergency rooms, if they don’t know what blood type somebody has and they have to be given blood immediately, they reach for the O-negative. We’ve all seen a show on television where they rush a guy in on a gurney and the doctor yells “two units of O-Neg, STAT!” I always grin when I hear that, because I’m O-Neg. Unfortunately I’m not always STAT!

Wouldn’t it be awesome if there was blood that could give a man life that would never end… eternal life!

Cytomegalovirus (CMV) is a common virus carried by more than half of the population. Most people who have had the virus never knew it and for the average healthy person, CMV does not cause a problem. However, for patients whose immune systems are not functioning properly CMV can be very serious.

So when a special patient such as a premature baby, a cancer patient or a transplant patient, or someone who cannot fight infection needs blood, they need CMV-negative. Now, couple the need for O-negative in an emergency situation with the need for CMV-negative blood, and you will understand why that blood is highly prized. Such is my blood!

When I go to the blood bank to donate, they pull out what they refer to as a ‘triple bag’. A triple bag is a one pint bag, but separated into three compartments. Thus, my single pint of blood can be distributed to not just one, but as many as three patients in need of this precious substance. I must confess I do not donate blood often. In fact, I can’t remember how many months it has been since I donated, and I can probably count on my fingers the number of times I’ve donated in my life. And for that I beg forgiveness.

Even so, I like to think that, because my blood is so valuable, there are people alive today that might not otherwise be alive. My blood is ‘life-giving’!

And yet, if somebody’s life is saved by my blood, it really isn’t saved… it’s just prolonged. They will surely die eventually. Wouldn’t it be awesome if there was blood that could give a man life that would never end… eternal life!

Ah… but there is! See, God intended for us all to have eternal life in fellowship with Him. But man sinned, and lost that fellowship. And the spiritual laws of the Universe say, “…without the shedding of blood there is no remission for sin.” So God sent his Son, his only Son, Jesus to die for our sins.

You know the story. Jesus was crucified on a cross, was buried in a tomb, and rose again on the third day. And through that death, burial and resurrection he secured eternal life for you and for me.

So if you find yourself in an emergency and needing some O negative CMV negative blood, give me a call. I’ll be glad to offer you as much as I can spare. But if you haven’t called on Jesus Christ, and accepted his blood as payment for your sin, don’t wait another moment. Call on him and find that eternal life of which I speak.


My finger fell off!
The Perfect Storm