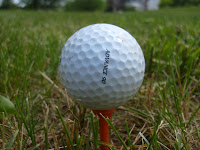 Spring has sprung and a man’s thoughts turn to… golf! There’s a saying in golf – Drive for show, Putt for dough! The gist of it is:

Drive for Show - If you can’t take a driver and hit a golf ball in the general direction of the fairway, then you should probably take up table tennis. In all fairness, Tiger Woods doesn’t hit the fairway every time. But if your ball flies off the tee and lands 30 feet behind you, or 3 inches in front of you, and that happens consistently, you might consider selling your clubs on CraigsList.

But if you can advance the ball in the general direction of the green, then the course is pretty forgiving. A ball hit a few feet off to the right or left is still pretty easy to bring back into the fairway and advance to the flagstick. You won’t be joining the tour any time soon, but you’ll have many pleasurable weekends stomping through the poison ivy in search of your ball.

Whether it’s a three foot putt or a duck-and-run tee shot, anything short of perfection would qualify as sin.
Putt for Dough - Putting is a different game altogether. That’s where the walk ends, the concentration shifts into ‘intense mode’ and victory is earned… or given. If it takes you three or four strokes to sink your putt, again my advice would be to trade your clubs for a ping-pong paddle and invest the difference in pork belly futures.

Sin - The game of golf is like sin. Now, to be clear, that’s not to say that playing golf is a sin… unless you‘ve seen my game!

Let me explain. A man tees up the ball and tries to drive it straight. But he’s a mere mortal and can’t drive it perfectly straight – at least not every time. But the course is forgiving. So he takes a ‘drop’ and shoots again. His partner makes an excellent tee shot and finds himself on the green, so he addresses the ball… and straightaway misses his three foot putt.

I think folks generally regard sin by degrees. If a man’s tee shot goes a few feet out of bounds he’s not too bad a fellow. But if it veers off and hits a Honda Civic on the interstate, well – that dude’s one bad sinner.

Mulligans - But in truth the best definition of sin is “missing the mark”. Whether it’s a three foot putt or a duck-and-run tee shot, anything short of perfection would qualify as sin. And there’s only One who ever shot perfection! His name is Jesus. The cool thing is that no matter how far off our shot is - He gives us a mulligan. For those of you who aren’t golf fans that means forgiveness is ours for the asking, and we get another shot.

But you only get those mulligans if you’re partnered with Jesus. If you’re in someone else’s cart it's time to talk to the marshal.

You may not be a golfer. If not, I hope you didn’t grow weary of all these golf metaphors. The truth is I don’t play golf as much anymore because it’s too hard on my throat - all that yelling “FORE”!