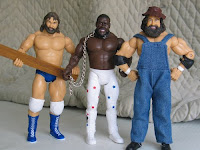 The worst part about growing up is losing that faith born of wide-eyed innocence. Tell a kid a story and he takes it as the gospel. In fact, a small boy will believe pretty much anything he’s told. But as he grows a little older he grows a little wiser. And after he’s been the butt of a few jokes he learns not to be so quick to take the bait.

But if, like me, the kid is very fortunate he gets to grow up in a home where he’s only told the truth, and so the disappointments are few… at least as long as he doesn’t leave the house!

But in reality, one of the biggest disappointments of my childhood happened in my very own home – right in the middle of the living room, on a summertime Saturday night.

Being such a naïve and sheltered little guy it took me longer than it should have to realize it...
It was the early 60s and every Saturday night without fail my brother and I would join dad in front of the TV set to watch our favorite show – Championship Wrestling! Championship Wrestling was a local show, filmed in the studios of Oklahoma City’s NBC affiliate, Channel 4. It was hosted by beloved radio and television celebrity Danny Williams, and it was THE event of the week. If you could stay awake all the way to the end you got to hear Danny Williams signature closing, “Good night, and watch out for flying chairs!”

Because it was filmed in the TV studio the crowd was small and the tickets were free. You just had to write and request them. We begged and begged, and finally dad broke down and ordered tickets. We could hardly wait for Saturday night. And then we were there. And then the wrestling started. I remember the sweat flying off the wrestlers and into the crowd.

Another thing I remember was how intrigued I was with the cameras. I waited for them to pan my direction and I did what most kids would do… I waved. And then I saw the cop coming my direction – and then I heard the cop say, “Kid, don’t wave at the camera.” That was my first experience going cross-ways with the law!

But back to the fights - After a couple of warm-up matches, the main event of the program would be a best-of-three tag-team match between the good guys and the villains. The villains would usually win the first match. Then the good guys would rally and take the second. The third match would tell the tale – crown the champs – settle the score once and for all.

And now for the big disappointment – Championship Wrestling was all FAKE!

Being such a naïve and sheltered little guy it took me longer than it should have to realize that it was really just the 1960s version of the modern day “info-mercial”, pitching those afore-mentioned tickets to the REAL fights. And another kid loses the faith!

With the arrival of cable TV's superstations, the phenomenon that is “Wrestling” spread like wildfire, almost like a religion. And it amazes me the number of grown men who worship at the altar of sleeper holds and pile drivers.

I’m guessing they were all hit by flying chairs.


Photo WWE Classics used by permission
at September 11, 2010 No comments: