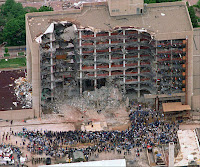 Photo of the Murrah Building, Oklahoma City, Oklahoma - in the public domain.
at October 28, 2015 No comments:

Duncan Oklahoma is a quaint little town in the southwestern region of the state, where life is quieter and slower than the Big City.  That’s not to say the town has never had its heyday.    It was in Duncan that Earl P. Halliburton first set up shop, founding that megalith of a corporation that bears his name.  You remember Halliburton; made famous by Dick Chaney and allegations of massive war-time profit taking.

But if you are assuming Earl P. to be the only man of fame to have roots in this forgotten hamlet, allow me to set you straight.  Remember Hoyt Axton?  No?  Well, he was that county singer-composer who penned the lyrics to the infamous tune ‘Joy to the World’.  No, not the Christmas tune; the Three Dog Night tune about a bullfrog named Jeremiah!

Also hailing from Duncan would be Ron Howard (who may or may not be my brother), and former U.S. Ambassador to the United Nations, Jean Kirkpatrick.  Beyond that, the balance of those finding their genus in Duncan Oklahoma would only be famous to their own people.  Such is the case with my family.   My father’s clan as well as my mother’s put down roots there, making it a significant place in my heritage.

But nowadays, it seems only one thing takes me back to Duncan – a funeral!  Grandparents and parents; uncles and aunts; headstones pock the Duncan landscape like pepperonis on a Sicilian pizza.  So it was with pleasure I was able to make the trek back to the old hometown for a joyous occasion; the celebration of the 80th birthdays of my Uncle Cliff and his lovely wife Kay!

If Stephens County has a mafia, my Uncle Cliff is assuredly the Godfather in residence!  He wheels and deals, moves and shakes, and God forbid your business should conflict with his business.  More than once I’ve felt compelled to warn him to be careful of dallying around fruit stands, especially if his driver called in sick that day!  If this reference is lost on you, rent the flick ‘The Godfather’.  It’s high time you watched it anyway.  And I’m just kidding around.  Uncle Cliff has never had anybody rubbed out (to my knowledge).

As I continue to put years behind me, the ones ahead seem fewer.  And those I love continue to pass away.  So it was a joy to be able to reunite with uncles, aunts and cousins once again, this side of the great beyond.  I especially enjoyed visiting with my old high school classmate and fishing buddy, Cousin Greg Wallraven.  If memory serves me, I always caught more and bigger fish than him at Aunt Jessie’s pond.  (His recollection may be different.)  And I got to again greet two of his sweet daughters, who I found out are fans of my writings.  It was good to see that Greg finally caught some keepers!

Here’s to fewer funerals and more time with those we love!