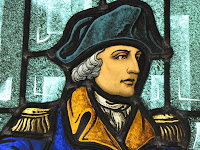 A little over a year ago I posted a piece called A Tale of Two Chiefs. In that story I talked about my desire to take a trip to Washington, tour the White House, and possibly have my picture taken with the President. Recently Stephanie and I were able to take my dream vacation to D.C., and I got to see and do all the things of which I have desired for years.

Of course, I didn’t get the chance to pose with the Pres. In fact, I didn’t even get the chance to tour the White House. Such tours have to be arranged by your U. S. Representative. And while I did apply for the tour, I don’t know if it is because my Rep is a rookie, or if the White House looked up my party affiliation, or (more likely) if my request was just submitted too late.

...then we turned to go back to the bus. And that’s when I saw him!

The truth is I did almost have the chance to shake hands with the President. See, we were there early in April, the week the government was threatening to shut down for lack of a budget. Of course, the government did not shut down, but continues to this day to show us the stellar quality of their work. And the day after the budget agreement was ironed out the President made a surprise visit to the Lincoln Memorial on the National Mall, where he shook hands with the surprised tourists. Unfortunately I had visited the Lincoln Memorial just a few hours earlier.

But even though I didn’t get tickets to the White House, it was at the White House that I experienced what may have been my most memorable moment of the trip. Not inside of course – I didn’t make it inside; but just outside the fence to the North, in Lafayette Park. Having spent the entire day on a tour bus seeing monuments, memorials, museums and statutes – universities, embassies, cathedrals and more, we topped the night off with yet another tour bus trip that had as its final destination a quick stop over at the White House.

We walked through Lafayette Park in awe at the site of that icon of freedom, that heart and soul of our nation that is the White House. We pointed at the lighted windows wondering who was in there and what they were doing, and thanked God Bill Clinton isn’t in there anymore. And we offered our opinions on the guy that is. We snapped pictures of the others and posed for our own. And then we turned to go back to the bus. And that’s when I saw him!

There is in Lafayette Park, directly in front of and in plain sight of the White House, a shabby tent flanked by large, amateurish looking yellow signs. The signs have words and pictures – words to explain the cause, and to explain that this vigil had been continuously maintained since 1981; and pictures depicting the horrors of nuclear war. Such a sight did not really surprise me. In fact my trip wouldn’t have been complete without seeing a White House protester (and possibly being one).

Standing there on the sidewalk I observed a tired looking old man, unshaven and unkempt – sitting on the ground - arms folded, body hunched over, eyes shut – resembling a drug addict or at least a street dweller. And like everyone else I adjusted my gait and my path to avoid him. But then an unusual thing happened. Something inside me compelled me to draw closer, to read his signs and afford myself the opportunity to at least attempt to understand what compels this man to stand vigil.

Understand that it was not his cause that tugged at my heart so hard as to pull me to his very threshold. It was the man himself. I can’t really say how affected I was by what I read, but I was profoundly affected by what I saw – this man’s commitment to his cause. After standing there reverently and reading all his signs, I spoke up. “God bless you, sir.” I said.

At the sound of my voice he immediately came to life. His head raised, his eyes opened wide and a smile broke across his face. And it was at that moment I experienced what may be the most lasting memory of my dream trip to D.C. It’s been said, “The eyes are the window to the soul.” That man had the kindest, the deepest, the most committed and caring eyes I have ever had the honor of staring into. He responded, “Thank you very much, my friend!” And then he bowed his head again.

I didn’t offer this man money – he wasn’t asking for money. I didn’t offer him food or drink. What I did offer him was the only thing I had to give that would be of any consequence to him. I offered him God’s Blessings – probably the only chance his cause really has.

I returned to the bus and the excitement and exhaustion that is a week in the Capitol City. But I couldn’t shake the feeling that if we could elect a President to these United States that has the eyes of the protester in the park, we would surely stand a chance of curing the ails of modern man.