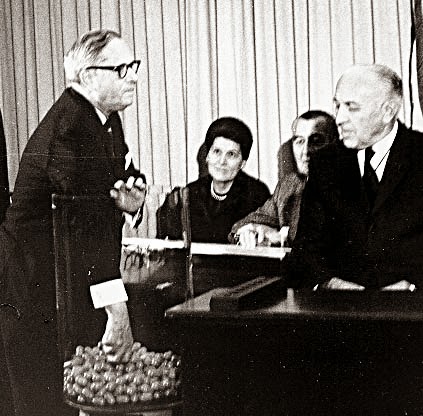 My stepson, Jerry is approaching his 18th birthday with an understandable measure of glee.  After all, think of the milestones of life that go into effect at 18; voting for president, smoking cigarettes (if you are so inclined), entering into legal contracts, and registering for the draft.   The what?

That’s right, Jerry.  Within 30 days of your upcoming birthday you are required by law to enter your registration for Selective Service.  That way the government will have your name and birth date, should global war break out on three major fronts.  Of course, you can always get out in front of things by enlisting.  Your local recruiter will give you the lowdown – and you can believe every word he says; right veterans?

At 084 I was sure to be wearing olive drab khakis, had it not been for President Nixon...

This got me thinking about how things were back when I was a kid. In December 1969 the Vietnam War was raging on, and men were needed.  So someone in the government wrote the date for each day of the year on pieces of paper and put them into 366 blue plastic capsules.  Those capsules were then placed in a shoebox and shaken up - really!   Then they were dumped into a large glass jar.  Some Senator had the honor of drawing out the first vial.  And every American guy between the ages of 18 and 26 who was born on September 14th shared first place in the Vietnam Lotto!

While that 1971 drawing was the last where men (boys) were actually drafted, they continued to draw birth dates every year through 1975.  And that very last drawing was for boys born in 1956, my year of birth!

Of course, I knew they were no longer drafting.  The Unites States had withdrawn ground forces from Vietnam in 1973.  But simply having a draft number was a bit, shall I say, spooky!  My particular induction number was 084.  Keep in mind; each year that they inducted boys, they took at least the first 95 birth dates.  At 084 I was sure to be wearing olive drab khakis, had it not been for President Nixon’s policy of Vietnamization.

But I must confess that one of the biggest regrets of my life is not having served in the United States military.  Every time I see a flag flying full-staff or half, I feel pride, and at the same time, a bit of shame.  And I envy the medals and ribbons my veteran friends earned for their brave service.

Of course, I did serve as a Boy Scout Leader.  Does that count?