Showing posts from August, 2015
Show all

About Stephanie - a note to the recipients of her gifts of life! 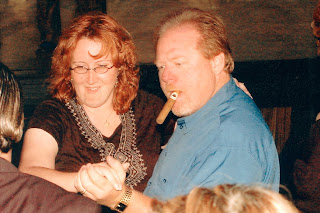 I met Stephanie when she was 25 and I was 45.  See, I had always run with a bit younger crowd, and she enjoyed hanging with an older crowd.  I was just amazed such a beautiful and vivacious lady would show an interest in me.  That was Memorial Day weekend, 2002.  We fell in love dancing to Country music, and drove to Vegas in my convertible Camaro to get married over Labor Day. From the beginning Stephanie told me her health wasn’t great, and that I would outlive her.  I passed that off as the babblings of a somewhat immature girl, but she persisted with this notion all the thirteen years I knew her.  And by the way, I soon realized she was anything but immature.  Stephie had a congenital deformity of her heart from birth, and I think she expected to die from that.  In truth, she just had a very weak body hidden behind a hardened steel constitution! Stephie started having severe migraine headaches, and they found a cyst in her brain.  We were scheduled to go to a neurosurgeon in
Post a Comment
Read more
More posts