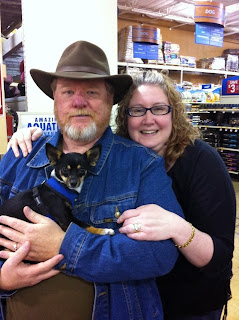 The distance between the stressful day and the serenity of home was disappearing behind me at 75 miles per hour when suddenly and without warning the car in front of me swerved to the inside lane.  And then I saw it - a black object lying in the middle of the road.

At first glance it resembled one of those large hunks of tire tread you often see littering the highway.

The formula of car-lengths to miles-per-hour flashed through my mind as I too swerved, but in the opposite direction, successfully avoiding the thing that blocked my way.  In retrospect I realize the reason I went right instead of left was because the car before me may or may not have created a new obstacle, and the right shoulder offered more surety of safe passage.

The only thing I had to offer was a quick prayer...

But that split-second decision to swerve right instead of left, while obviously the safest choice, also afforded me a full view of the object I was swerving to miss.  And words fail me as I attempt to express the depth of pain; the anguish of soul that flooded over me at what I witnessed on that sad and fateful day.   That black object lying in the middle of the road started to move!

Immediately I realized that hunk of tread was not a hunk of tread at all, but an animal that had stumbled into harm’s way.  And even at such a high speed I was able to see that that was not just some animal, but a puppy; an innocent little black puppy that had suddenly found itself in a life or death struggle.

But in truth, this struggle was over before it began.  At the end of this day the only possible outcome involved the death of this sweet little pup.

Never before or since have I felt so helpless.  At 75 miles per hour it would take me hundreds of feet to stop.  And with cars and trucks in my rear view mirror, themselves barreling down upon this unfortunate pup, any attempt I might make to help would only serve to create a deeper peril.  The only thing I had to offer was a quick prayer for God to lead this little guy to safety.  But in my heart I knew this was a prayer of presumption, sadly void of any faith or expectation.

Two things happened on that sad day.  First, a little black puppy died on the highway.  And second, a man’s heart was torn with anguish.

For days I fought the mental picture of a sweet little puppy in peril and my utter helplessness to save him from that bitter end.  And I bit my lip to push back the pain.  But what I really struggled with was the guilt I felt for not being able to save that little dog.  I wanted – I needed to be able to express my sorrow for not stopping – for not offering my own life to save that little guy.  But in truth it was I who needed to be saved.

Three months passed, and you would think that terrible memory would have begun to fade.  But it had not.  Simply put, there was a hole in my heart the shape of a little black puppy!  What I could not know was that God already had the wheels in motion on a plan.

It was adopt-a-dog day at PetSmart and Stephanie and I stopped by to say hi to the homeless hounds.  While we had no intention of adding a third to our K-9 collection, we love dogs and enjoy petting them, then leaving them for someone else to take home for keeps.

But then I spotted a little black dog, and he spotted me!  This was the cutest, the most innocent, the most loving little pup – obviously created by God with purpose and precision.

“I want to hold that one,” I told the nice lady.   She retrieved him from his pen and put him in my arms. And at that very moment I knew this dog was my dog.

We say Jack is everybody’s dog because Jack loves everybody.  Jack never met a stranger.  And he has no fear.  Simply put, Jack is the perfect dog.  Period!  If you have been over to the house and met Jack, you wish you could take him home.  But you can’t.  See, while Jack is everybody’s dog, he was built by God to fit a little black dog shaped hole I used to have in my heart.

Oh, I realize I will outlive Jack.  The day will come that I will have to say goodbye to him.  But while that will be a difficult day, I’m not worried.   See, God has already set the wheels in motion on a plan…
at September 08, 2013 No comments: