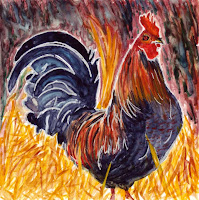 We’ve all known someone that, because of their easy going demeanor or comical personality, can get by with things that you or I would surely be called on; jokes told, comments made, judgments passed. Those things, and especially decisions made and actions taken are the things of which reputations are woven.

Reputations are a funny thing. Sometimes they’re deserved, sometimes undeserved… and sometimes a person actually seeks out a reputation that doesn’t really represent him at all. At one time in my life I fell into that category.

I sat on the proverbial fence, and warmed at the wrong fire… and people noticed.

It was Passion Week and Jesus had been taken to the high priest’s house. Peter followed the crowd, but far enough back that he wouldn’t be recognized. It was cold so some people started a fire and Peter sat down with them to warm himself. But a woman in the group recognized him as a follower of Jesus. “This man was with Jesus”, she declared, pointing at Peter. Peter denied her accusation, saying, “Woman, I don’t know him!”

You’re probably familiar with what happened next. After a second and third denial a rooster crowed. And Peter recalled the words Jesus prophetically spoke to him – how he would deny Him 3 times before the cock crows.

How Peter wished he hadn’t warmed himself by the devil’s fire!

My dad used that passage of scripture to point out to me the importance of choosing my crowd carefully. “Son, don’t warm yourself at the Devil’s fire” he warned. But I didn’t listen to dad. See, I enjoyed hanging out with the bad crowd. If there was trouble I wanted to be within viewing distance of it. Oh, I had no intention of being in the middle of it. I just wanted people to think I was in the middle of it. I wanted to be known as a bad boy without having to actually be a bad boy.

See, during my high school years I already knew God had a calling on my life, and I had every intention of taking my life in that direction. But I wanted to be a popular high school kid first. So I sat on the proverbial fence, and warmed at the wrong fire… and people noticed. My youth pastor explained to me why I wasn’t picked to be on the youth council. And certain kids weren’t allowed to hang out with me! And I snarled at how short-sighted those kids’ parents were for not seeing what was really in my heart. And yet I did little to show them what was really in my heart.

I don’t fully understand the romantic appeal of sin. I come closer to understanding that desire a man has to rise above sin – to take the high road and find himself pleasing to God. But what I do fully understand is the eternal struggle in a man’s heart between the two. The reason I understand that struggle is because it has played out in me so many times.

A pastor I once knew had a saying… “It takes a lot of ‘atta-boys’ to make up for one ‘oops’!” I wish my reputation would have always reflected my desire to please God rather than my desire for the periphery of trouble.

I want people to point at me and say, "That man was with Jesus", so now I’m working on the ‘atta-boys’!