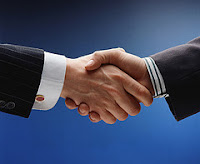 There’s a scriptural teaching that when one prays a prayer asking God for material provision, that prayer is done in secrecy. In other words, ask God to provide, but tell no man. Thus you have not prodded another individual to step in and ‘meet your need’, but have truly trusted God to provide – either the answer to your prayer or an understanding of how His plan is better.

When someone evokes the ‘God told me’ clause you don’t dispute it...

In 1980 I prayed such a prayer. My wife’s birthday was coming up and I had decided I wanted to give a $100 bill as a present. And, while in this day and age a $100 bill may be about average for a gift, back then it was an insurmountable obstacle… at least to me. So I took it to God in prayer, and told no man.

In charismatic circles it was (rightly) taught that God blessed people through other people. So when you prayed a prayer such as the one I described, you started watching your mailbox, and you made yourself especially conspicuous in crowds, so that you didn’t miss what God was going to do for you. It would be terrible for your ship to come it and you to not be at the dock!

Just a few days before the deadline I was at church and a man came up to me and gave me a charismatic handshake.

Now, it was also taught that it was rude to examine the gift in front of the giver. You were to slip it in your pocket thankfully, and go on your way. Then, later and in private, you pulled it out of your pocket to see the denomination… and, if it was more than one bill, to count it. But this time I ‘accidentally’ caught a glimpse of it as I slipped it in my pocket. And besides that, I knew what I had prayed for, and was expecting to receive. Sure enough, I saw the corner of a $100 bill. At least that’s what I thought I saw!

Of course I lavished gratitude on him, and shared with him that I had been expecting that very thing. I even told him why I had prayed for it. “You better take a look at that”, he said, extremely embarrassed. “I know what it is”, I answered. “I caught a glimpse of it.” But he repeated himself, “You better take another look at it.” So I pulled it out of my pocket… and found it to be a religious tract, designed to look like a $100 bill.

He apologized profusely for his little practical joke, and how momentously it had backfired. Of course, I laughed it off. There was no way he could have anticipated how his joke fell into my expectations of answered prayer so seamlessly. Only a cruel devil could orchestrate such a ‘coincidence’ - or was it a laughing angel?

As the next church service approached I found myself hoping he wouldn’t be there, so as to avoid the awkwardness of it all. But there he was. I certainly couldn’t avoid him, so I went up to shake his hand, as if nothing had ever happened. And he gave me another charismatic handshake. But I bet you can guess the difference with this one. Yes, the $100 bill was real! He even said it… “That one’s real!”

Now I was the one who was embarrassed. I had to think this gift was motivated by guilt, and yet it surely resembled the answer to my prayer. Do I accept it or not? Trying to smooth things over I said, “You don’t have to do this, man. That was just an unfortunate joke. Don’t worry about it”, or something to that effect. But he wasn’t having it. “No… God told me to give this to you”, he insisted.

When someone evokes the ‘God told me’ clause you don’t dispute it. So I thanked him again, and kept it.

I’m not sure what the lesson is here. Oh, I’m quite sure what his lesson was… don’t play practical jokes unless you’re willing to pay the price! But what do I take from this, other than the $100? That God hears our prayers? That God answers our prayers? Perhaps something about humility?

I think I have it… the lesson to be learned is - God has a sense of humor!