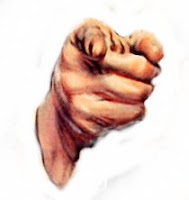 A few mornings ago I was backing out of my garage to go to work, but there was a man sitting in a little red car on the street in front of my house, blocking me in. You may know that we live at the very end of a cul-de-sac in the very back of a housing addition. The only cars that come down our street are folks who have lost their way and parents of little-leaguers practicing at the church field next to us. So this guy sitting in his idling car in front of my house at 7:30 in the morning was a bit curious… even unnerving.

I quickly grew weary of waiting and backed toward his car. He saw me and drove away… at least a few feet away so that he wasn’t in front of my house any more. And I drove on. But when I saw that he wasn’t leaving the neighborhood I picked up the cell phone and called Stephanie back at the house. She looked out the window and told me that he was back in front of our house again. I decided to turn around and confront him.

Confrontation is a dicey thing. It can escalate to a chalk drawing on the pavement in the shape of a human body...

Confrontation is a dicey thing. It can lead to a new friend or it can escalate to a chalk drawing on the pavement in the shape of a human body. Of course, it usually results in something in between, such as an explanation. And I might add that confrontation is something with which I have never been comfortable. And so, when I am faced with the “fight or flight” decision to confront, I will usually find a tactful way to avoid it. But not when it comes to the safety of my wife or my home.

It took just a few moments for me to be driving back up my street. He saw me and started to drive away from the end of the cul-de-sac where he had just repositioned himself. As we approached one another I veered my truck toward him just enough to get his attention, and rolled down my window. I half way expected him to ‘rabbit’, but instead he slowed and rolled down his window.

I told you earlier that I’m not comfortable with confrontation. And that being the case, when I do confront, it is with an overwhelming show of force. It’s not so much a decision to come on strong as it is the manifestation of the emotions that brought me to that point. Stephanie tells me that when I speak harshly to someone it comes across quite fearsome. Frankly you and I know I’m just a little kitten in a man suit, but this guy saw something quite different when our cars met, and I stared him in the eye and said, “WHO THE HELL ARE YOU AND WHAT THE HELL ARE YOU DOING PARKED IN FRONT OF MY HOUSE?”

Now, I want to stop here and apologize to my church friends for my language… but it’s what I said, and so I’ll live with your judgement. I suspect if you’d been there you would have said the same thing… or at least been glad I said it. And I’m pretty sure it’s what I’d say again, given the same circumstances.

The man quickly introduced himself by name. He then explained that he is a home builder starting construction on a house on the lot down the street from us. He said that earlier he was on the phone to his sister in Phoenix and did not realize he was blocking me. I think at that point he would have been happy to have been frisked and handcuffed, as long as I didn’t just drop him right where he sat.

I accepted his explanation, although I did tell Stephanie, over the phone and within earshot of him, that she should make sure she has her gun close by her side this morning. Then I assured him that we have an excellent neighborhood watch – a conclusion, I believe, to which he had already arrived.

A few days later a truck dropped a load of rebar and lumber, and a backhoe dug footings. And so I’m feeling pretty confident he is who he says he is. I doubt a common cat burglar would go to such expense to prop up a cover story.

Something else that happened a few days later is that it dawned on me… that was something dad would have done. The same stern look, the same tone of voice, the same kitten in a man suit that shows such awesomeness in confrontation… Oh Dear Lord… I’ve become my dad!

Is it a sad day when you cross the threshold of being your father’s son, to being your father made over? Or is it a badge of honor? I can’t say, but I can’t deny what is true. So all I will say is… “Hey, com’ere… pull my finger!”