You Are What You Are 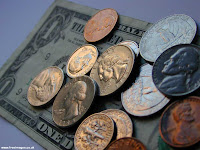 Awhile back a store cashier accidentally gave me too much change. I realized it and returned the overage. While thankful, she was astonished that somebody would reject free money. My answer to her was, “My honesty comes at a higher price than a couple of bucks!”

Did you know that if a stamp is used to mail a letter, and then the machine at the post office fails to cancel that stamp, it is still considered by federal law to be a used stamp? Would you peel it off and reuse it? Nobody would ever know. But forty-four cents? Surely you’re integrity is worth more than that! If you’re going to be a thief, you may as well steal a car or something else of real value!

How many people would you have to kill to be a murderer? The obvious answer is one. But I disagree...

I’ve cleaned up an off-color joke to make a point. If you’re concerned you may be offended, please turn away. But in all fairness, it’s wasn’t that off-color in the first place... and besides, you’ve heard it before.

A man at a party had been noticing a beautiful woman all evening. Finally he approached her. “Miss, would you spend time with me for a million dollars?” he asked. She was taken aback by the proposition, and actually found herself overwhelmed at the prospect of becoming an instant millionaire. “Yes, I believe I would.” she answered.

He immediately responded, “How about for twenty bucks?” Quite offended, she sharply replied, “What do you think I am… an escort?” His answer … “Miss, that fact has already been established. Now we’re just negotiating the price!”

How many people would you have to kill to be a murderer? The obvious answer is one. But I disagree. I say zero. See, The 1970s TV detective Baretta said, “Don’t do the crime if you can’t do the time.” But the bible puts it another way, “As a man thinks in his heart, so is he.”

I believe that what you harbor in your heart defines you. Oh sure, we all joke about wanting to “kill” someone from time to time. But in your heart of hearts, if the only thing keeping you from strangling somebody is the thought of lethal injection, gas chamber, electric chair or firing squad… well, you are what you are. And if you don’t steal because you might get caught… well, you are what you are.

And that’s where Grace comes in. Man could not save himself from himself. And all the law can say is, “Don’t do it”, and then dictate the punishment when he does act on the evil in his heart. It takes Grace to save a man from himself. And then you no longer are what you were! Thank God for Grace. And Grace is only available in one place.

If you don’t know where that is, ask.