The Thrill of the Hunt 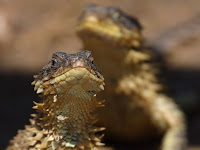 Usually when someone goes by an alias it’s because they’re hiding from the law, or maybe from their fans, real or imaginary. Texans often find it wise to use an alias while north of the river – especially during football season. I know of a whole species from Texas that goes by an alias when in Oklahoma…the Texas Horned Lizard.

It was Easter Sunday and my niece Beverly and little sister Brenda, only 4 days apart in age and both just cute as a button, were itching for an Easter egg hunt. So the whole family loaded up in cars and headed to the local park. As it happened we chose the park that Hellboy called home. We weren’t there long before we discovered Hellboy, and pointed him out to the girls. They were fascinated and frightened, but there were eggs to be found. So the hunt began. And that’s when it happened.

Beverly’s Grandpa Kepler saw that she was about to step on an Easter egg, so he yelled out a warning, “Watch out Beverly!” Now if you read this blog regularly you know our family has German heritage. But you would have known it anyway if you’d been there to see little Beverly as she goose stepped across the park. Everyone laughed…except Beverly. She just screamed. As it turned out she thought Hellboy was out to get her. But I’m guessing she scared him more than he scared her.

I’m not sure what ever happened to Hellboy. Beverly moved on to bigger lizards!
at February 05, 2010