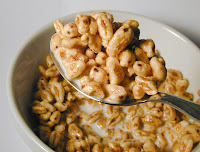 My first thought was, “I’ve been poisoned!” Then I got to thinking, “Maybe I have a lawsuit here.” But I can hear the defense attorney now… “Mr. Kepler, do you usually put food in your mouth without making sure it’s dead first?” I’m in trouble on that one. I better not sue…

When we were kids there was this really cool amusement park in town. We got to go once or twice, but mom and dad couldn’t afford to take us very often, so instead mom would take us with her to the market for groceries. Granted there weren’t roller coasters or arcade games at the market, but there were shopping carts to ride, and fruits and vegetables to throw at each other.

...after about my third spoon full, I realized something unusual. My cereal was moving!

One of the things we looked forward to was picking which breakfast cereal we wanted. We would each get to pick one box. I remember standing on the cereal aisle for what seemed like hours trying to decide. Actually though, the only criteria for my choice was the toy in the box. Mom probably had to pay an extra buck for me to get a little trinket worth a penny.

I’m all grown up now, but that tradition is still intact – I still stand for hours on the cereal aisle comparing the boxes. But now I select my cereal according to my adult taste buds, and seldom get a toy. However, occasionally you get something in your cereal you didn’t bargain for.

I grabbed the box of Mueslix from the pantry and filled my bowl - poured on the milk and dug in. Then, after about my third spoon full, I realized something unusual. My cereal was moving! At first I noticed one little feller doing the backstroke. But, like a movie where the camera pans out slowly, revealing a whole screen full of action, I realized the entire bowl was bustling with activity.

What was really bad about it was that I was on a diet at the time; ©Weight Watchers to be specific. And if you’ve ever done ©Weight Watchers you know how important it is to count the points for every bite. But I couldn’t find little white worms in the book. It really wouldn’t have helped because I didn’t know how many of them I’d eaten anyway. As it turned out that wasn’t a problem though - I wasn’t in an eating mood for the rest of the day so I had plenty of points so spare.

I called Kellogg’s customer service line and was informed by this really calm sounding lady that I had ingested Indian Meal Worms. She chuckled, and assured me that I was in no danger, and that actually they were a great source of protein. She didn’t come right out and say they eat them as snacks at the Kellogg’s corporate office, but she kind of left that impression. Wow, should I send in extra money for this unexpected windfall?

But I guess we all get over the gross things we’ve eaten – or we’d never go back to McDonalds, huh!