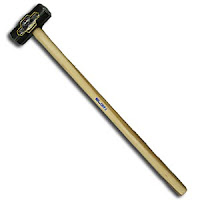 Jack was tall and slim, with black hair and a full beard, albeit somewhat scraggly. But what made Jack so noticeable were the scars on his forearms. At some point in his life, and not too terribly long ago, Jack had taken a knife and torn open his arms from the wrist to the inside of his elbow – on both sides! Jack joked about it, about how he'd "botched the job". But it was obvious by the depth and width of the scars that his attempt was real and he’d given it his best shot.

...the guy that gets to pray with someone and lead them to Christ gets to see the result of all that labor. With Jack, I wanted to be that guy!

“You’re a religious guy, aren’t you?” Jack asked me as he passed by, pushing a load to be dumped down the chute. I’d just met Jack about an hour before, and all I’d done was assign to him a sledge hammer and wheelbarrow, and point him to the area I needed him to work. “I guess you could call me religious”, I answered. He dumped the busted up concrete and went back for another load.

It was 1980 and I was working for a guy that had the contract to gut the interior of an old office building slated for remodel. Needing some help I called a temp agency and they sent over two guys, one of which was Jack. I gave these two workmen their assignments, and turned back to my own sledgehammer.

The highest goal for an Evangelical Christian is to be a ‘soul-winner’. That is, somebody who will share his faith in Jesus Christ with others who do not have such a relationship, and persuade them, convince them… convert them – if you will, to their own, new-found faith in Christ. There are people who have daily goals for how many souls they can win. But, sadly, they are the exception rather than the rule. The ‘average’ Christian may have led a handful of people to Christ, if that many.

Don’t misunderstand me - no man is alone in his labors for the Lord. The Apostle Paul wrote that one man plants a seed, another man waters that seed, and God gets the increase thereof. But the guy that gets to pray with someone and lead them to Christ gets to see the result of all that labor. With Jack, I wanted to be that guy!

As he rolled by with his next wheelbarrow load I asked him, “Are you a religious guy?” He replied, “I’m what you’d call a lost soul!” And back he went to fetch another load. On his next pass I simply asked him “…Wanna talk about it?” We took an early lunch.

Jack and I sat down right there at that construction site and I shared with him about who Jesus Christ is and what he means to me… and what he could mean to him. I can’t recall the exact words I said, but then again they really weren’t my words. This was one of those times the Holy Spirit just kind of takes over and uses your voice – like the alien in “Independence Day” did with that freaky scientist guy. OK… maybe not quite like that, but you know what I mean.

Finally I talked myself out, and so I cleared my throat… and summoned my courage… and looked Jack straight in the eye and asked, “Would you like to invite Jesus into your heart?” Jack gave me an honest answer, “I could say the words, but I don’t know if I’d really believe it or not.”

“Fair enough”, I said, as disappointed as a hunter who just missed a shot at a trophy buck. So I asked him if I could pray for him. I figured I’d say a quick prayer and we’d get back to work. He consented, and so I bowed my head and prayed.

All I did was ask God to show Jack how much He loved him and to answer the questions Jack had in his heart, and I said Amen. Then Jack looked up at me with these big, wide silver dollar eyes. “What did you do?” he asked. “I felt something happen inside me!” Not knowing what else to say I immediately asked him, “Can you believe it now?” “YES”, he said. So - right then and there - I led him in what we call the sinner’s prayer. And Jack became a Believer!

I don’t know what it was about me that caused Jack to ask me that opening question. But I know enough about how the Kingdom of God works to know that I wasn’t the first religious guy to cross his path. I’m just thankful I was the one that got to “close the deal”.

I took Jack and bought him a good leather-bound bible that day, and made sure he was in church the next Sunday. But Jack was a transient, sleeping in flop houses and cheap hotels. He’d just blown into town and didn't stay too long. He worked with me for a few days, and we talked about the things of God. And then I never saw him again.

But I will!
Church Life Documenting Flag Inspirational

Wasn’t it Al Capone who said, “Vote early, and often”?  That’s the Chicago way!  And we’ve all heard reports of people voting from their graves in Colorado and California.   Then there’s the famous quote ascribed to Communist leader Joseph Stalin that goes something like this; “Those who cast the votes decide nothing.  Those who count the votes decide everything.”   It’s enough to make a soul cynical on the whole idea of democracy.  To echo that age-old sentiment, “Does my vote really count?”  The answer to that question may very well rest with how the votes are counted.  In days of old people marked their choice on a piece of paper and stuffed it in a ballet box (perhaps early and often).  And we stayed up into the wee hours of the morning to learn the results.   However, in the Information Age that is the 21 st century we have optical scan devices and direct recording electronic (DRE) systems with touch screens.  These methods were designed to count the ever growing n
Read more