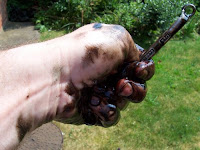 I changed the oil in our car the other night. Now this may not seem noteworthy to you, but what you don’t know is that I haven’t changed the oil in a car in over 20 years. But with the economy like it is and finances a little tight we are doing what we can to conserve. A dime here, a dollar there…it adds up. Actually I didn’t save any money though - I used it to buy bullets for the next men’s breakfast at church. What can I say - Sometimes there’s not enough food to go around and it gets a bit ugly.

A trip to Wal-Mart for a basket full of stuff and I was ready to go. I found that oil now comes in 5 quart containers. I bought one. I also got a new oil filter and one of those drain-pans. You know, you drain the oil into it and tighten the cap. Then when you have time you drive it down to the auto center and pour it in their drum. So neat…so tidy….yeah, right! And I bought a wrench to remove the oil filter.

First one – too big! Next one – too small! This must be what Goldilocks felt like.
And by the way, our next men’s breakfast is at the gun range. That's really why I bought the bullets.

The first step in this task is to remove the plug and drain the old oil. At least I THOUGHT that was the first step. More about that later. Not having an automobile lift in my garage, I had to lie flat on my back to get to the drain plug. So I laid down and scooted under to feel the plug and see what size wrench I need. Like my fingers are a gauge or something! (I’d seen my brother do it, and he seemed to always get it right.) It felt like a 9/16ths to me…yep, definitely a 9/16ths. I got up, fetched the wrench and scooted under again. It wasn’t a 9/16th. Up again for a bigger wrench, I grabbed two just to be safe, and scooted under. It wasn’t a 5/8ths. It wasn’t an 11/16ths either.

What in the world is this crazy nut? Oh yeah, foreign car – think metric. I don’t own metric wrenches…only sockets, so I grabbed a 16 and an 18, just to be safe, and under I scooted… again! First one – too big! Next one – too small! This must be what Goldilocks felt like. On my 5th scoot-under I found it… 17 millimeters of sweet success. Off came the nut - and at that split second I realized it - the FIRST step to changing oil is to position the drain-pan under the plug.

Luckily this isn’t my first mess. So I have this big squirt bottle of purple stuff that cuts grease and oil. I’m proud to say there is NOT a permanent oil stain in the middle of my garage…just this really clean spot!

Finally...thankfully, my task was completed. The car has fresh oil, and I'm feelin' like a man. I will say this though… at least I have the drain-pan and filter wrench for next time… like there’s gonna be a next time!

There’s a certain satisfaction in a job well done. I guess that’s why those guys at the quick-change place are always smiling so big when I drive off. Ya think?


Photo Time to clean the oil filter used by permission
at January 21, 2010