The African in the Closet 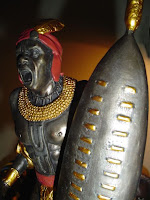 The year is 1900, or 1800…..or 1700, it doesn’t matter. The point is that it’s not current times. The place is Africa – a tribal village in the darkest depths of the jungle. The people are cannibals, feasting on the captured of other tribes, or missionaries whenever possible. The focus is on one of the natives. He’s the alpha male; leader of the pack. In modern day Sicily he would be the Godfather, but we’re not in modern day Sicily, we’re in ancient Africa. This chieftain is naked except for a breech-cloth (which is probably to accommodate modern day TV viewers). He’s tall but pot bellied, and adorned in an elaborate headdress of feathers and bones, like the bone through his pierced nose. He holds a six foot long spear decorated to match his headgear, and he’s standing impatiently in front of a large black pot over a blazing fire…waiting for it to boil.

My maternal grandmother was a sweet lady – we called her Nanny. She was a member of the 20th century, born six years after its beginning and dying 2 years before its end. Back then men went out to build something or kill something, and the wives and mothers and grandmothers made the house a home with their cooking and cleaning…and sewing and cooking… and cooking. This was my Nanny, and every summer we grandkids would take 2 week turns enjoying the fruits of her labors. Oh yeah, and she took us fishing!

I’ve introduced you to two people. Right now you are probably wondering what one has to do with the other.

I was a young adult, and had dropped by to visit my aging Nanny. She bustled around getting bedding together and making sure I would be comfortable during my overnight stay. They she said something funny…something so funny that it has been fodder for hilarity in my family for decades now.

“If you get cold there’s an African in the closet!”

Now, if I had just told you about my Nanny and what she said, you may have pictured Martin Luther King or someone you work with. But this is my story, a boy raised on Saturday Morning episodes of Tarzan. And so I painted for you the picture conjured in my mind when I was told I could warm up with the “African in the closet”! That boiling pot would have warmed me for sure!

In case you missed it altogether, she was saying, “There’s an afghan in the closet.” Nanny wasn’t skilled in the Queens’ English, but she did crochet a warm afghan, and her love for us was even warmer! Please know it’s not my intention to disrespect Africans, or to make fun of my Nanny - but to preserve a fond memory of her as she was.

There were a few other words for which she had unique pronunciations. So next time you see my mom or my brother…or one of my sisters, ask the question, “Do you have a koop'-un so I can buy some bat'-trees for my kam'-rey? I want to take a picture of the African in the closet!”


My finger fell off!
The Perfect Storm