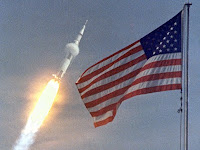 Ever been arrested? The closest I ever got to a jail cell was in Edmond, Oklahoma in the summer of ‘71. For all I know there may still be a warrant out for me.

If you are on Broadway and you drive straight north through Edmond, you will run smack into a cemetery. Now, behind that cemetery there used to be a drive in movie theatre, The Woodstock. It was small and showed 2nd rate movies, but it was close and it was cheap, and the local kids hung out there.

Calculating the angles and trajectories needed, factoring in the speed of the car and the length of the fuse… Rocket Science had come to Edmond...
Across the road from the drive-in was undeveloped land. Oh, it’s all houses now, but back then it was untouched by human hands…or at least by human bulldozers. Several hundred feet back from the road was a tree line, and what we referred to as “The Black Forest”. And that’s where it happened.

Three or four of us decided to camp out in the Black Forest one Friday night. So we pitched our tent and laid out our sleeping bags, and got all settled in for the night. Then we went on the prowl. First we went to town on our motorcycles and watched a movie at Edmond’s only indoor theatre. Then we grabbed some food and headed back to the tent. But we were bored, and it was still early, and… we had fireworks!

Then I was stricken with a flash of genius. “Let’s shoot ‘em at cars!” Yeah…I know…it took a whole kettle of stupid to come up with that one.

Being a distant cousin of Johannes Kepler, I started calculating the angles and trajectories needed, factoring in the speed of the car and the length of the fuse… Rocket science had come to Edmond! And now a car turns onto Broadway headed north. Hold it…wait a second…not yet…not yet…NOW! I lit the fuse! The rocket shot out of the bottle, straight for the car, and in what must have been the most perfect mathematical calculation in the history of science, that rocket exploded just as it hit the windshield of that car…on the driver’s side!

Now I didn’t stop to think what effect it would have on the driver of that car. That would have been grown-up thinking – something I wasn’t capable of at that time. But what happened next was something I certainly didn’t anticipate. I mean, the forces of the universe just couldn’t be this cruel. Red lights started to spin. I SHOT A COP CAR!

The cop flipped on his spotlight and aimed it at the field. Remember, the tree line is several hundred feet back. Thankfully the field had some high grass in it, and when the spotlight came close to us we hit the ground, flat on our bellies. Then we got up and ran. Running and dropping - dropping and running... it was a scene out of "The Great Escape". Finally we made it to the trees. We scurried into our tent and zipped it up. We crawled inside the sleeping bags and zipped them up. But first we hid the fireworks and matches…inside the tent! Like I said… not a brain cell among us.

Apparently shooting a cop car isn’t so serious if you just do it with a bottle rocket. But I won’t be doing it again. I can’t run that fast any more.

Bottle rockets are illegal in Oklahoma now. It's known as Reece's Law!


I'm pretty sure my brother was switched at birth.
Oh Brother Who Art Thou


MY FAVORITES FOR INSPIRATION:
My Darkest Hour - My Brightest Day
...we realized she was just trying to ease the pain we would surely face when daybreak found the baby no longer alive. (EDITOR'S NOTE: This story was picked up for publication in the Pentecostal Evangel.)