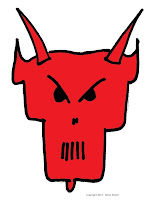 “Start Chase Collingsworth as fullback”, the mural on the wall growled.

“Chase Collingsworth?” questioned Coach Roberts, with more than a little angst in his voice, and keeping constant vigil lest someone catch him talking to a wall. “But Collingsworth’s got no drive. He’s a lazy do-nothing!”

“As you say!” said Coach Roberts. And he scratched the change into his list of starters.


Coach Roberts had been the head coach at Darnell High for seven years, and for seven years he experienced frustration trumped by consternation as he watched the Demons win just enough games to keep him employed, but always – ALWAYS losing the big one; the game that would clinch a spot in the State playoffs. Coach Roberts was born in Darnell, as was his father and his father’s father. In fact he was the fifth generation of Roberts to live in Darnell, the fourth to be born there, and the third to head-coach the town’s high school football team.

His grandfather, Langston Roberts truly laid the foundation for football in Darnell. He was, and still is the holder of the state record for most consecutive wins in the history of 2-A football. Langston Roberts coached his boys to 44 straight victories, and in the process took the 2-A state championship four years running, before his retirement for ‘medical’ reasons.


There are two items of particular interest about Langston Roberts; first that he won those four titles with basically the same players, whose performance had been consistently mediocre. Of course every year freshmen came out for the team and seniors graduated. But year after year the Darnell Demons always seemed to play football about the same, finishing the season somewhere in the middle of the brackets – a team by all accounts average. Average that is, except for those four unexplainable, undefinable, perfect seasons.

The other item of note regarding Justin’s grandfather was that after winning those four state championships he went stark, raving, insane, crazy mad. The medical term is paranoia; a malady not to be scoffed at. But the good people of Darnell are fickle fans, and frustrated by the end of the winning streak, scoff they did, tagging him Looney Langston.


With Langston’s retirement his son Langston Roberts, Jr. took over the head coaching job. Langston, Jr. went by the nickname Handy, partly because he was tired of being mistaken for his father and partly because he was indeed a handy guy to have around. That is, unless you wanted a winning season on the football field. Oh, Handy could fire up a broken down school bus or fix a busted pipe. He just couldn’t seem to fire up his offense or fix his broken down defense. Though he searched high and low, Handy never discovered the magic his father had.

Handy Roberts coached for five years - five very long and depressing years - before he was taken by a tragic car accident, although the rumor was it was no accident at all. And while the town feigned sadness, inside they rejoiced in the hope that the Darnell drought would end and they could get back to winning again. That job befell his son, Justin.

Of course, such legends are pure nonsense; fodder for campfire ghost stories used to scare little children into submission, lest they chatter all night in their tents. Just legends - at least that’s what Coach Roberts used to think, but that was before his eyes were opened to a realm of which few are aware; an unseen dominion of power and insight this mere football coach had never imagined.


Twelve years in an asylum must be a terrible existence, especially for someone once so vibrant, so vivacious - indeed so victorious. Langston Roberts had wasted away wearing blue pajamas and talking to walls that did not talk back. And then he found his eternal peace. God rest his soul. “It was a fitting end for him to die the week before the season’s first game,” Justin thought. “He can watch this one from Heaven.”

The whole town turned out for Langston Roberts’ funeral. Apparently the scoffing was forgotten. Looney Langston was no more. After all, Langston Roberts gave this dry, dusty little nothing of a town in the middle of nowhere a source of pride. In his funeral message Reverend Canfield of St. Ignatius Methodist Church even reminded them that it was Langston Roberts who put the town of Darnell on the map; a reference to the fact that the official maps of the State Highway Department always referred to the town as Darnel, with only one L. It was only after four consecutive state championships the map was corrected to the two-L spelling. And if a citizen of Darnell was heard saying this was just a coincidence, a Roberts was always close by to defend their claim to fame.


As soon as the graveside services ended the family filed somberly back to the homestead, a three story frame on the edge of town that was the childhood home of Grandpa Langston, and which Justin had inherited. After the food was served and eaten and the guests said their goodbyes, Justin’s Grandma Pearl leaned down and whispered in his ear, “Come back into the den with me. I have something for you.”

So stealthy was her invitation that Justin’s curiosity was piqued. What did Grandma Pearl have to share with him? Was it a deep dark secret from his grandfather? Or perhaps some valuable heirloom reserved for him? He quietly slipped out of the room and joined her in the den, where he soon learned it was both.


As he walked through the door she took him by the hand and slid a ring onto his finger. He recognized the ring as the signet ring his Grandpa Langston used to wear everywhere he went. In fact, Justin tried to remember a single time or place when Grandpa Langston didn’t have that ring on. He even bore that ring on his finger for the 12 long years he was in the institution.

The ring was formed of yellow gold with a figure of the Darnell Demon in pyrope garnet, a blood red, semi-precious stone; and with two incredibly rare black diopsides, giving off the signature star effect for which blue sapphires are better known. But a mere star sapphire could never match the mesmerizing effect of the black diopside. These stones made this ring a one of a kind – one of a kind indeed! Justin determined right there and then he would wear Grandpa Langston’s signet ring with pride, perhaps never take it off.

The ring was the valuable heirloom, but what was the deep dark secret?


The week that began with the funeral would end with the first game of the season, and so Coach Roberts was in a lather as he darted about tending to all the ducks that must be in a row before an opening game. But passing under the mural of the Darnell Demon he suddenly froze in his tracks, terror stricken, when he heard a voice growl out, “Toby Stevens to run the end around”.

“What? Who’s there? Who said that?” Coach Roberts choked out, on the verge of fainting.

“Toby Stevens to run the end-around!” the guttural voice repeated.

Then Coach Roberts realized that the eyes of the demon on his signet ring were glowing, and so were the eyes on the Darnell Demon; the mural on the wall. And that’s when Coach Justin Roberts learned the secret of Coach Langston Roberts; the secret that mercifully skipped a generation before growling back to life. And that Friday night Sophomore Toby Stephens won the game for Darnell with a brilliantly called end-around run.


Being about half the man his grandfather was, Justin Roberts coached 2 perfect seasons - a 22 win streak, before retiring for ‘medical’ reasons. He lived another 6 years in blue pajamas, and talked to walls that did not talk back.

And after the funeral Justin’s widow slipped a signet ring onto her son’s hand, for the good people of Darnell would demand another championship.
at September 15, 2011