Please be advised - this is a work of fiction.
Any similarity to actual persons living or dead is purely coincidental. 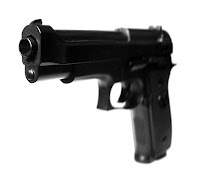 I just killed two men. And now I sit locked in the back seat of this police cruiser, fighting the urge to vomit and wondering what comes next.

The chaos was overwhelming as these two invaders charged through the door from the garage, and into our front hall - a hall that leads straight to my bedroom. Spartan and Trojan, the killer Chihuahuas that sleep at the foot of our bed sensed the danger a few seconds before I was aware of anything unusual. And it was their reaction to the sound of the overhead garage door that alerted me, starting the whole sequence of events.

Eleven seconds - that’s how long it took me to spring to life, grab my handgun from the nightstand and lunge to the floor of my bedroom doorway. But I said fifteen. That leaves four seconds, and that’s exactly how long I pondered the “shoot-don’t shoot” question every gun owner prays he will never have to ask himself; a prayer that went unanswered on this darkest of nights.

It’s funny how things sometimes seem to happen in slow motion. A car changes lanes too close and you have to hit the shoulder to avoid a violent crash, and then you realize you had more than enough time to think it through and react. See, the human brain has the capacity to function at a much higher level than we realize. When the circumstances force it - when it becomes a life or death proposition - the brain is at the ready. And it’s a good thing too, because we would all be dead many times over if not for that mental reflex.

“SHOOT”, my brain told me. Actually the thought process went like this: “Oh my God - they’re in our house - aim the gun - stay down low - who are those guys - they don’t belong here - are they here to kill us - do I shoot them - would that be murder - no - protect self and family - SHOOT!”… And all that happened in just four seconds.

I would imagine Brown and Washington had similar high-level brain events as they charged through the door of what they had convinced themselves was an empty house only to find two little dogs charging toward them, yapping out in anger. Theirs probably went something like this, “Dogs – we didn’t think about that – how big are these dogs – can they hurt us – should we run – no – they don’t look so…”

Then loud noises and spinning projectiles from the other end of the hall brought it all to an abrupt end. And now two separate pools commingle into a sea of blood on my parquet floor.

Breaking into my house, although surely their last, was not the first crime Brown and Washington ever committed. In fact, it wasn’t even the first crime they committed today. Just a few hours ago, having been ejected from the basketball arena for trying to steal t-shirts from the gift shop, they picked out a car in the parking lot and bashed a rock through the window. Brown remembered a tip he’d picked up from a hoodlum friend about how people will set their GPS device with their home address, and how thieves will steal a car with a GPS and a garage door opener.

For all they did know, what Brown and Washington did not know was that I had loaned my garage door opener to my neighbor, Tommy Johnstone. See in two weeks Tommy’s daughter, Summer was graduating from law school; a monumental accomplishment for her, not being the brightest bulb on the block. And so, to fulfill a promise he made two years ago, Tommy went out and bought her the slickest 2009 Camaro you ever laid eyes on.

I agreed to let Tommy hide that Camaro in my garage for a few days. And that’s how my spare garage door opener came to be found clipped to the visor of Tommy’s car; the same car that was stolen by Brown and Washington. And that’s why, when the GPS directed them to Tommy’s house, whose driveway is only 10 feet from mine, it was my garage door that opened instead of Tommy’s.

You know, upon raising the door and finding the garage full of vehicles, smarter men would have reasoned that somebody must be home. But then smarter men would not be breaking into houses in the first place, would they! Funny thing is - all I know about Brown and Washington are their ages and that they aren’t very smart… oh yeah, and that their bullet riddled bodies now lie dead in my house. I can only guess whether they have prison records, or mothers somewhere praying for them, or gang brothers who will be out to avenge their deaths.

And now the time has come for me to get the answer to that question fueling my fears, “What happens next?” See, a while ago a sleek little black sports car drove up and out stepped Clayton Carter Hallstead, District Attorney for this fair city. The state legislature saw fit to afford great latitude to local DAs when it comes to the prosecution of a crime, and so it will be District Attorney Hallstead’s call whether I spend the rest of this night in a jail cell pending charges or down on my knees, cleaning our floor. Jail or home - either way I expect I will spend it on my knees!

Of course, the aforementioned reference to ‘prosecution of a crime’ implies that a crime has actually taken place. And while I know the laws well enough to know I was within my legal rights to shoot the intruders, my heart of hearts is telling me I was in the wrong. Surely I should have first tried reasoning with them. Is that really my heart, or is it just my doubts taking advantage of my weakened constitution? Having never killed two men before, I don’t feel qualified to say.

Hallstead talked with the police officers for what seemed like hours. First he was briefed by the detectives that had so forcefully taken control of the crime scene when they arrived. Then he asked some questions of the first officer who responded to the 911 call. Oh my God! The 911 call will be played over and over on the local news - maybe even go national. I wonder what I said… how I sounded?

With the window left down only a few inches, for ventilation I suppose, I was barely able to hear anything being said. But I did hear one thing. Definitely and distinctly I heard Hallstead declare, “Clear cut case of ‘Make My Day’- A clean shoot!” I was free to go.

The ‘Make My Day’ comment was a reference to a law on the books that gives a person the right to defend his home against intruders. The term comes from an old Clint Eastwood movie where Eastwood asks a criminal to try to attack him.

“Make my day!” he says, to express the pleasure he would get from shooting the guy right between the eyes.

The irony of it is that Dirty Harry Callahan, the cop Eastwood was playing, wasn’t defending his home when he made that iconic statement, but was actually in an inner city alley. How that term came to represent a guy defending his home is beyond my comprehension. But the bigger irony, as I just learned tonight, is that shooting a guy dead brings no pleasure at all, just gut wrenching pain; a pain I fear will never go away.

Hearing there won’t be any charges against me for the shooting brought a rush of relief, but with it a shift in my emotions - from fear to dread - as the events of the evening replayed in my mind. Finally an officer opened the car door and I emerged, but immediately fell to my knees. And doubled over in the grass of my own front yard, in front of cops and coroners, in front of neighbors and news crews, I lost my fight against the urge to vomit.

‘Make My Day’ - It’s not a bad law, just a law badly named. It should have been called ‘Change My Life’.


Photo Pistol by Jean Sander - used by permission
at September 15, 2011