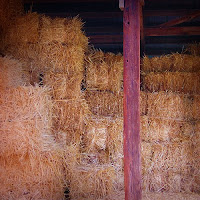 This is one of those stories you hate to admit to, but don’t want to see die. I’ve been accused of being a city boy, and this will remove all doubt.

When I was 16 years old I would come in from school to dad’s shop every day, and watch things while he went for a break to enjoy a cup of coffee. One day I showed up after school but instead of dad heading to the coffee shop he sent me on an errand.

Dad had read somewhere that if you are planting tomatoes you want to put some alfalfa hay in the soil. I don’t know if it was to aerate or provide nutrients, or what he idea was. I am not a horticulturist, and so far have never played one on TV. The fact is that I’ve never played anything on TV, although I did play a gangster in a theatrical production once. But that has nothing to do with alfalfa hay.

A lady came in the shop that day and dad made arrangements with her for me to pick up some hay – 2 square bales. They had already negotiated the price and payment had been tendered. All that was left was delivery of the product. And for that he had a strong backed - albeit weak minded - helper (me).

Dad gave me written directions from his shop in downtown Edmond out to a farm just south of Guthrie, down a county road in the middle of nowhere – perhaps a bit to the left side of nowhere – I’m not sure. Nevertheless, I drove… and drove.

After awhile I arrived at the farm, knocked on the door and was met by a nice lady. She pointed to the barn and said, “Go get a couple of bales. It’s paid for.”

And so I drove my 1968 Dodge Charger with the 3 speed automatic transmission and black vinyl top down to the barn. In the process I added another option to my car – a layer of cow fuel on the tires. (Cow fuel – tactful, huh!)

I threw a couple of bales in the back of the Charger and made the trek the 20 or so miles back to downtown Edmond just in time for dad to close up the shop. He came out to see his newly purchased farm product.

“Son,” he said, “I hate to tell you this… but even a city boy should know the difference between hay and straw!”

There’s a difference? (Well, it’s a rhetorical question now. I learned that hay and straw are different when I was a mere lad of 16.)

The drive back to the farm wasn’t so bad. I’d rather be driving in the country than working at the shop. But I did not relish the embarrassment of explaining to the lady that I had to return the straw and pick up the hay dad had actually purchased. I thought about telling her I was just testing dad to see if he knew the difference; or that I was just talking the straw out for a test drive.

When I got back to the farm I made the decision to bypass the farm house and just drive straight to the barn. I figured if I did get caught – well, they say forgiveness is easier to get than permission. I’m not sure how embarrassment fits into that axiom. But it’s a moot point, as I was able to make the switch without having to explain anything to the farmer’s wife.

The moral of the story is, “Don’t send a city boy to do a country boy’s job”. And in the process I learned the coolest way to burn rubber in a hotrod. Well… it’s not really rubber.
at November 05, 2011