Uncle Dick and His Ship 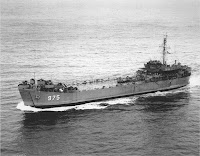 When a man grows old and dies, his legacy – or at least the memory of his life – passes to his sons, and then to his son’s sons. Of course, if he doesn’t have sons it passes to his daughters. But if a man has no sons or daughters, will he be forgotten?

I remember meeting Uncle Dick only once in my life, or maybe twice. He was born on 11/11/11 and died in February 1980. And, while my father and I drove to San Diego for his funeral, we pulled into town just as it was taking place, and so we missed it. Uncle Dick is buried in a beautiful cemetery out on Point Loma.

This truly remarkable feat of seamanship was the only time in recorded naval history that such an event occurred...

But it is Uncle Dick’s death that really defines his legacy, or – not really his death, but more so how he died. In 1955 Navy Captain Richard Purdy, a WWII combat veteran, was the skipper of the USS Marion County (LST-975) when he and his ship were ordered to participate in an experiment code-named “Operation Wigwam”, a nuclear weapon test so secret that even its codename was classified and could not be mentioned without the highest clearances, and under penalty of imprisonment.

In Operation Wigwam, conducted by The Department of Defense and The Scripps Institution of Oceanography, three submarines were placed underwater, 500 miles off the coast of San Diego, and then a 30 kiloton nuclear bomb was detonated in a 12,000 foot ocean, at a depth of 2,000 feet. The objective was to see if a surface vessel could use nuclear weapons to destroy submerged enemy submarines without causing harm to itself.

At 1:00 pm Pacific Time on May 14, 1955 the bomb was detonated… and three submarines were obliterated. But that detonation also sent a fireball-bubble 12,000 feet into the air, covering a one and a half mile area of the ocean and sending highly radioactive seawater in all directions.

The Marion County was an LST-542-class tank landing ship, a ship with a set of large doors on the bow (front) that opened to off-load tanks, cargo and troops onto an unimproved shore. The Marion County’s role in the experiment placed it in close proximity to Surface Zero. And so, when the bomb exploded, the crewmen were overwhelmed with fear as they witnessed the 1,200 foot tidal wave surging their way. Using the ship’s loudspeaker system Commander Purdy was able to calm the crew, who braced themselves for impact.

Damages to the Marion County were extensive. At first Commander Purdy thought the ship would surely sink as a result of the blast. But after the shock passed and the water settled, the Marion County was still afloat. However, those huge bow doors mentioned earlier were damaged to the extent that the ship could not move forward. And so, Uncle Dick had to navigate his damaged ship back to Long Beach Harbor, a trip of over 500 miles, in reverse! To sail a ship in reverse for more than a few hundred yards had never before been attempted, nor has it since. This truly remarkable feat of seamanship was the only time in recorded naval history that such an event occurred.

When the Marion County finally reached dock, Captain Purdy’s wife, my Aunt Ruth, was there to meet him. But Uncle Dick was not allowed to leave the ship. A technician from the Scripps Institute checked him for radiation and found his shoes were too “hot” to allow him to leave the vessel. In fact, the deck was so hot with radiation that all who had walked on it had to change clothes and shoes before departing.

If you looked up “Operation Wigwam” on Wikipedia.com you would read the government’s official version of the event. You would read that, “…The test was carried out without incident, and radiation effects were negligible.” The brief, three paragraph account closes with the statement that “… only three personnel received doses (of radiation) of over 0.5 rems.” What you would not read about are the dozens of sailors, contractors and civilians who participated in Operation Wigwam, and have since died of various types of cancer.

On his deathbed, suffering the ravages of leukemia and lung cancer, Commander Purdy, my Uncle Dick, called in a young neighbor, Ron Josephson, and spoke haltingly into a tape recorder, detailing and setting down the record on Wigwam. "It's too late for me, son, but I feel that we're all left holding the bag, all those crews, not just on my ship, but all those crews."

A crack investigative reporting team broke the story of Operation Wigwam, and the December 2, 1980 issue of New West Magazine published the full account. A short time later the story was scheduled to run on the television news magazine show “20/20”, but as I remember it, the segment was pulled at the last minute.

Incidentally, according to Wikipedia.com, the USS Marion County was transferred to the Republic of Vietnam, where she served South Vietnam as RVNS Cam Ranh (HQ-500). Following the Fall of Saigon on 29 April 1975, Cam Ranh escaped to the Philippines, was renamed BRP Zamboanga Del Sur (LT-86), and serves the Philippine Navy to this day.

RIP Uncle Dick - you are not forgotten.


Read more about Uncle Dick and his ship: