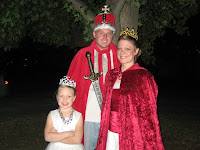 I need your help with something. I don’t understand the concept of royalty. Oh, I fully comprehend how a family would rise up to rule over their friends and neighbors – offering a safe haven back when defense and conquest were ugly realities of life.

I’ve seen all the movies with good kings (Robin Hood) and bad kings (Braveheart). It’s easy to understand how dynasties rose and fell in centuries gone by. I just don’t see the need for royalty in this 21st century.

Why can’t my family be a 21st century dynasty? I could be King Reece...
Take Prince William, for instance. You remember Prince William don’t you? He’s the eldest son of Princess Diana, of fame for a number of reasons, not the least of which was her fiery death in a tunnel in Paris; and Prince Charles, famous primarily for his royal divorce and his extremely large honker.

I see where Prince William is getting married. And the whole world is glued to their sets to see what church they will select, and what flavor their cake will be, and at what opulent vacation retreat they will honeymoon. I see these “news” stories over my morning coffee, and I think to myself, “who cares?”!

My question is this – What makes these people any better than… say, my people? Why can’t my family be a 21st century dynasty? I could be King Reece and Queen Stephanie would never have to clean the house again. Her 149 servants would do that. By the way, that number, 149, is not an arbitrary number. That’s how many servants Prince Charles has.

Believe it or not, no press at all reported on it when Stephanie and I drove to Vegas to get married. By the way, in case you’re interested, the “church” we chose was A Hollywood Wedding Chapel on Las Vegas Blvd. Our cake was whatever Planet Hollywood serves as complementary to newlyweds, and our honeymoon spot was that opulent vacation retreat known as Las Vegas, Nevada.

But back to the Kepler Dynasty – I would be a good king, like Richard the Lionhearted, not an evil king like Edward Longshanks, the Hammer of the Scots. Would you be willing to bow down and kiss the Kepler Crest on the Royal Ring? No? I didn’t think so.

Now I read where Prince William and his fiancée Kate Middleton, after their wedding in April, will not have ANY servants. Not a butler, not a chef (apparently Kate’s a pretty good cook), not even a personal valet (although I’m betting they will at least have maid service come in once a week to run the vacuum).

You know, this “no servants” policy makes me wonder if Prince William just doesn’t get the concept of royalty.

I wonder if he would kiss the Kepler Crest.