Pollyanna and the Box Turtle 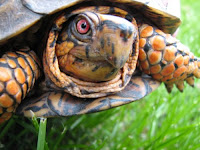 Back in the 60s every town big enough to have a TV station had characters famous for their afternoon childrens shows. The shows were locally produced and usually starred either a clown or a guy in a Halloween costume… with a clown for a sidekick. I’m sure they all went to yearly conventions where they wore their outfits and had the world’s weirdest party.

If you’re close to my age and you grew up in Oklahoma City then you probably remember The Foreman Scotty Show. Scotty wore white denim cowboy clothes topped off with a white hat (because he was a good guy). Kids would visit the studio to sit on a bench and have this guy stick a microphone in their face just long enough to shout their names. If it was your birthday you got to sit on a wooden horse with other kids who were also celebrating their birthday. I watched the show just hoping to see a kid fall off the horse.

I’m probably the only guy you know that actually had his pet box turtle run away from home...
Every self respecting kid in town sent in their name and received a membership card in the mail, and every day they had a drawing and gave away prizes. I never made it to the studio but I’ll never forget the day Foreman Scotty stuck his arm in that hopper and pulled out the card with my name on it. I had 30 minutes to call the show and claim my prize. I was so excited to hear Foreman Scotty call my name on TV, and when I read off my secret number into the phone Foreman Scotty declared me “A Winner”.

Imagine my excitement when I heard what I’d won for having my name drawn – a Pollyanna game and a box turtle! Now I didn’t know who or what Pollyanna was, but hey, it was FREE and it was MINE. I did know what a box turtle was. You know, now that I’m older and wiser I look back and realize that game was something the game store couldn’t sell, and the box turtle was probably picked up on the road by the pet store owner so could get the advertising without having to give away a real pet.

I soon learned that Pollyanna was a fictional character in a book – a little orphan girl whose optimism was so contagious that she brought gladness to the dispirited town in which she lived. Even when she was run over by a car and crippled she never lost her happiness and optimism in life. And even now in some circles her name is synonymous with a person who always finds something to be glad about. I’m guessing she wouldn’t have kept that goofy grin if she knew that nobody wanted to buy her game, and it had to be given away for free to some kid that got his name drawn out of a hopper.

I don’t recall ever actually playing the Pollyanna game (after all, it was named after a girl). I probably threw the game pieces at my brother for making fun of my girlie game.

And I’m probably the only guy you know that actually had his pet box turtle run away from home. I didn’t even have time to name it before it was gone with the wind.

You’d think I would have been warped for life by the whole affair. But hey, Foreman Scotty called me a winner!