Infidels in the Cross Hairs? 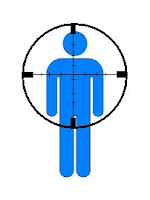 Of late we have been told that there are two kinds of Muslims, those who follow a radical agenda and those who embrace a vision of peaceful co-existance.

Now I don't know if this is true or not, and with so many talking heads betraying their own vanity on the idiot box, it's hard to know what to believe, but some say the Koran demands that true believers kill all infidels. And, my fellow Christian brothers, you and I would be those infidels in the cross-hairs.

I now confess that I believe while there are many kinds of Muslims - there's really only one kind of Muslim...

But of course, there are just as many who proclaim that a true believer of the Koran seeks to extend a hand of friendship to all men, in hopes that they might win some to their cause. Sounds oddly similar to another global religion - known as Christianity.

And I'm pretty sure that in at least one way Islam is like Christianity. In Christianity there are so many factions saying so many different things that an outsider would be confused about what Christianity really teaches. One TV preacher says there is no other way to heaven but by receiving Jesus Christ as your savior. Another says God would never send anybody to a literal hell, and so you've got it made-in-the-shade-with-a-lemonade!

I remember a Baptist minister from Oklahoma City who made the statement, "God does not hear the prayers of Jews". It made the national news. Many were outraged (especially the Jews). "God cut an eternal covenant with Abraham!" they pointed out, "And eternity hasn't ended yet".

Truth is that a sparrow doesn't fall to the ground without God seeing it, and he knows the number of hairs on our head. To say he can't hear a Jew is to put a limit on a limitless God. I believe what that preacher probably meant was that we are living in a different time with a different game plan, and only prayers made to God in the Name of Jesus are effectual in these "days of the Gentiles".

But in fact, I do believe there are two kinds of people in this world. There are those without Christ and without hope, and those who have made Jesus Christ their Lord and Savior.