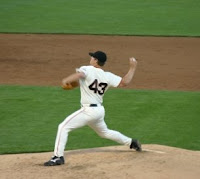 Every once in a while there comes along an athlete extraordinaire. We’re talking about a Cy Young Award or a Heisman Trophy winner… perhaps even someone as dominating of his or her particular sport as a Tiger Woods. I believe I have discovered such an incredible athlete.

Now, I’m not really sure how the sports agent business works, but if this kid is really as good as I think he is I may go ahead and make a drastic career change, to represent this boy. Of course, I’m going to have to track him down first. Let me explain.

Tonight was my bi-weekly trip to take my stepson Jerry home to Broken Arrow after a weekend at his mom’s (and my) house. We were driving through Tulsa up the BA Expressway when I noticed a couple of kids playing in a creek bed that passed under the highway. Just as we approached the boys I saw one go into a perfect wind up, as if he were pitching a baseball. But it wasn’t a baseball… it was a rock!

Maybe I’ve discovered a future Cy Young or Heisman winner...
And folks, that rock hit my car dead center. Now, had it been high and outside or low and off a tire I wouldn’t have been so impressed. But this rock was definitely in the strike zone. And you have to realize I was driving 65 miles an hour at the time. (In fact, as long as you’re not a State Trooper, I was probably driving about 70).

First, I gather there weren’t any other cars on base or the boy would have thrown from his stretch instead of his windup. (You’d have to be a baseball fan to get that joke, and it still wouldn’t be funny. Sorry.)

Second, right after the kid threw the rock, he ran. Everyone knows the pitcher doesn’t run… the batter does. I’ll probably have to teach him some rules.

Third, the boys were wearing soccer uniforms. I remember thinking, “It’s a crying shame these kids are relegated to playing a sport where you don’t use your arms. Such an arm this kid has!

And fourth, this guy really ought to be playing football. Anyone that can hit a car traveling 70 miles per hour can certainly lead a receiver at any speed and distance!

So maybe I’ve discovered a future Cy Young or Heisman winner... maybe not. But of one thing I am certain – when this boy grows up he will be the star of his ball team… at the State Prison!