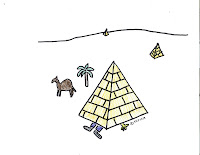 It's not the products – don’t use ‘em, have no idea how good they are. I may be wrong, but I’ve always assumed the name Amway is a hybrid of the words "American" and "Way". But I’m an American, and I get most of my stuff at Wal-Mart. I had an Amway salesman once tell me I could save the gas of driving to Wal-Mart. “That’s ok,” I told him. “I’m headed there anyway for a new set of tires, some shotgun shells and one of those roasted chickens they have in a case up by the register.”

Oh, it's not because they don't have ammo or roasted chicken. And it’s really not the company itself either. I don’t know that much about it. What I hate about Amway is their way of doing business. Rightly or wrongly, Amway has the reputation of being one of the first and the biggest to apply that business model commonly known as the “pyramid”.

Here’s how it happens. First you start noticing slight changes in the routine that is your friendship - subtle hints that something’s different. You aren’t spending as much time doing the friend things you used to do. Your conversations aren’t as light-hearted as before.

And then you get that all-telling invitation, “We’d like you guys to come over for dinner. We have something we want to share with you!” Oh, you've had dinner there lots of times, but never have you received a formal invitation. That pain you are experiencing in the pit of your stomach right now is what it feels like to realize you’ve just morphed from friend into prospect!

I just hate it when a friend tells me he's signed up for the latest greatest new home-marketing product. See, I don't have that many friends to spare.

If this is the American Way I think I’ll sign up for EgypWay. EgypWay may not have roasted chicken either, but at least their pyramids are real!
at August 05, 2011