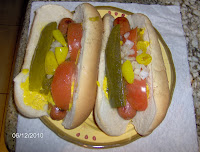 I find myself in the awkward position of owing an apology to an entire city. See, I had to visit the city of Chicago several years ago to install a computer network for a client. Actually I was in a sleepy bedroom community several miles west of Chicago proper, but as with most metro areas, you don’t really notice when you have passed from one hamlet to another… except for maybe the color of the street signs – the street “name” signs I mean. The stop signs are all red just like back home.

But back to the apology – When you’re on the road alone there’s nothing to do from quitting time to starting time, at least without getting yourself into trouble. So I decided to drive into the “city”. Having never been to Chicago all I had to go by was a map, so I plotted a route and headed in.

At one point I realized I did not dare stop for stop signs (the red ones), so I started “floating” them. At one intersection I barely got through in time, almost being cut off by a gang of hooligans. I had never been so scared in my life, and in fact never since. The next day I was told by a local, “heck, the cops don’t even drive through that neighborhood!”

But back to the apology - I have always been quick to report that the city of Chicago has no redeeming value. But alas, they have the Chicago Dog. See, once I safely reached the heart of the Second City I stumbled across this little hole in the wall bar built into the side of an old office building. And that’s where I discovered the Chicago Dog! Mercy Sakes Alive! These people put peppers and pickles and tomatoes on a hot dog. Back home we just slather mustard on the dog or drown it in ketchup. (In fact, a lot of Okies drown “everything” in ketchup.)

Since that day I have ordered Chicago dogs in dozens of diners, drive-ins and dives all over the country (apologies to Guy Fieri). There was even a time when Stephanie had a lay-over in Chicago, and she actually bought a couple from a vender in the airport and hand-carried them to me. I wolfed them down standing in baggage claim at the OKC airport. Have I got a wonderful bride, or what?

So when I sat down today at a little joint in Edmond and discovered a Chicago Dog on the menu I couldn’t pass it up. But… where were the peppers? I didn’t remember whether the menu actually listed peppers, but doesn’t it go without saying? That disappointment put me in the mood for a real Chicago Dog.

I couldn’t afford a plane ticket to O’Hare so I headed to the market. While admiring my creation in the photo please overlook the substitution of poppy seed rolls with white rolls and Sport peppers with hot chili peppers. In Oklahoma you just have to do the best you can.